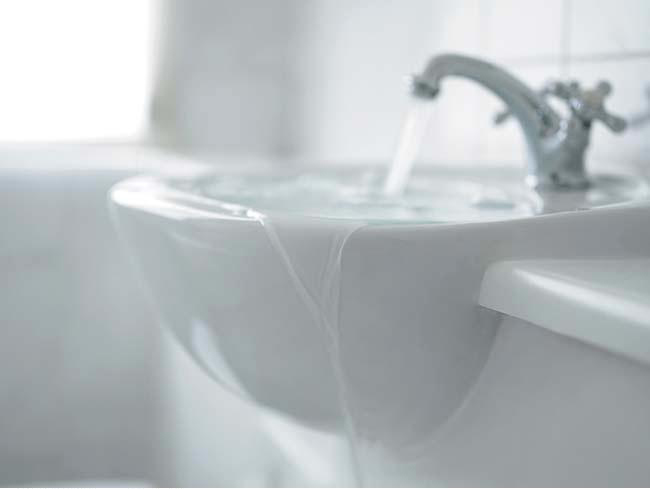 Forty year ago, as a young postgraduate student of Public Health at the London School of Hygiene and Tropical Medicine in 1973, I listened to a guest lecture on ‘ The future directions in Research’. The speaker, Prof. Denis Burkitt  (of Burkitt Lymphoma fame) had just become head of the Medical Research Council in UK, after some path breaking research on ‘Fibre in the diet’. The core of his lecture was an important question he posed to all us youngsters, as we began our new vocations.  Are you a Floor Mopper or a Tap turner off – he asked.

I was 25 and a young graduate from St. John’s Medical College, challenged to a new vocation in community oriented medicine, after an inspiring and life changing internship experience in an East Pakistan refugee camp near Kolkatta. This experience  had completely  alienated me from the  cadaveric oriented  medical education and the dehumanizing,  organ centered, hospital based clinical  training I had received  till then. Something was missing! Health was supposed  to be well being and  not just  illness and disease management. The refugee camp experience  had shown me how much a marginalized community  could do when its participation was sought by enthusiastic health professionals. I also discovered how little my medical education had taught me about building health or working with people and communities. I was both confused and disillusioned and began searching for a new meaning to health.

Dr. Burkitt, asked us all to imagine a room with a wash basin. On entering this room, we were told we would find that 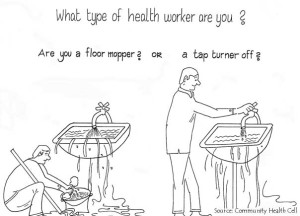 water is pouring out of an open tap, the outlets in the sink are blocked, the sink is overflowing and there is a mess on the floor. He then asked us what would be  our first response to tackle  this challenging  situation? Would you turn the tap off and unblock the sink before cleaning up the mess or would you take up a floor mop and  be satisfied mopping the floor. Naturally we all opted for becoming first a ‘tap turner off’. This seemed common sense!  He then provocatively noted that the medical and nursing professions have long become  used to  floor mopping,  using drugs and technology to tackle the overflow of illnesses and disabilities in the community. They were enthralled by the ‘cherry or chocolate flavoured floor mops’ manufactured by the industry.  This had led to the establishment of a dominant  paradigm of the bio-medical, techno-managerial, model of hospital medicine with little  interest among health professionals to support health promotion and health policy.  Initially I was quite disturbed by this question as many of you may be today.

Brought up on the white coat and stethoscope mentality  and pavlovian prescribing reflexology of orthodox medicine, the challenge that we may just be  floor mopping when we could attempt to   turn off the tap of disease was thought provoking.  Our knowledge of medicine and health has grown over the last few decades and we were beginning to understand better the  preventable causes of illnesses and disease. Could we use this emerging knowledge to evolve new strategies for health and healthy living? This was Burkitt’s challenge!

Over the next few decades, this question continued to provoke me, though over the years I also became less disturbed and grew a bit wiser. I realized that we were beginning to increasingly appreciate, measure and diagnose the deeper, social, economic, political, cultural, and ecological determinants of health. Newer health agenda and health empowering strategies were been developed to varying levels of competence and complexity. New disciplines were emerging, new systems, new paradigms, new innovative ideas.

Dr. Burkitt’s searching question thus became a lifelong stimulus for me.  Along the way  two other  ‘Gurus’  added to a new evolving understanding.  In the 1980’s Prof. Banerji of Jawaharlal Nehru University (JNU), Delhi  inspired many of us to understand “ health service development as a socio- cultural process, a political process, a technology and managerial process with an epidemiological and sociological perspective.” A few years later during a sabbatical at the London School, I learnt from Prof. Geoffrey Rose, the well known epidemiologist that “ the primary determinants of disease are mainly economic and social and therefore its remedies must also be economic and social…. medicine and politics cannot and should not be kept apart.” These new exhortations led to a new journey now spanning over three decades of exploration and innovation towards   a new role  for a doctor ;  a new vision for  the medical and health professions;  and  a new commitment for all those joining  the ‘healing ministry’.

The ‘floor mopper’ in me gradually metamorphosed into the ‘tap turner off’ as my colleagues and I began this new journey.

In 1984 a group of us Johnite alumni caught the ‘tap turner off’ bug and decided to move from ‘floor mopping’ to ‘tap turning off’ on a more sustained basis. Over 25 years – the Society for Community Health Awareness, Research and Action was evolved. Today as we  explore  new areas of Health and Health  promotion – Community Health , Medical Pluralism and alternative  healing, Equity and Health  Rights, Universal Health Coverage  and Environmental Health – SOCHARA has  increasingly become  the Centre for ‘Tap turning off’

In 1948, some early ‘tap turners off’ had inspired WHO to define Health as ‘physical, mental and social well being’.  In 1978 some more ‘tap turners off’ helped to evolved the famous Alma Ata  Declaration of Health for All  which spoke about ideas  like equity, health rights, appropriate technology, inter-sectoral development and community participation. By 2000AD the ‘Community of Tap Turners Off’ had grown. My colleagues and I have been deeply involved with some interesting  developments as we began to network with this new community of health professional since the 1990’s.  Over 2500 of them in India, took four people trains to Kolkatta for the first People’s Health Assembly  in November 2000 and 1500 from 75 countries gathered in Savar, Bangladesh  in December 2000 for the first Global People’s Health Assembly leading to the  evolution of a ‘tap turner off’ movement  at both national and global level with their own  Charters for Health.

I am glad to join this new online journal,  initiated by a group of young doctors from Bangalore. This innovative  and entertaining, initiative is a great opportunity to share these new challenges, paradigms,  and innovations with you all.  We plan to call  the column – Are you a  Tap Turner Off?   and  will try to keep you  informed about   new developments locally and globally, new debates and new domains of knowledge and practice which build health and health policy. Today  the young, socially networked  internet generation,  more  informed and empowered, will probably  constitute the bulk of the readership of this initiative. They would have already  come across many new terms, goals and visions, that are emerging  among  this community of health professionals who consider themselves ‘tap turners off’ .

Today this community is discussing people  centered  primary health care,  sustainable development goals, globalization of health  and health solidarity, universal  health coverage,  health in all policies and  community  action for health. I have just returned from 8th Global Conference of Health Promotion, in Helsinki, where I was invited to lead the theme on social change and health.  I spoke at the plenary  on  themes such as – Countervailing power, social vaccines, and communitization. This set of a twitter storm putting me also in touch with the growing community health professionals who are committed to this emerging paradigm.

What do these terminologies related to social medicine, healthy public policy, and health promotion mean? What relevance do they have for the young health professional of the new millennium? Keep track of this column. My colleagues and I will try to share, explore, inspire and introduce you to this new paradigm.

Welcome  to the new health community of ‘ Tap turners off’ 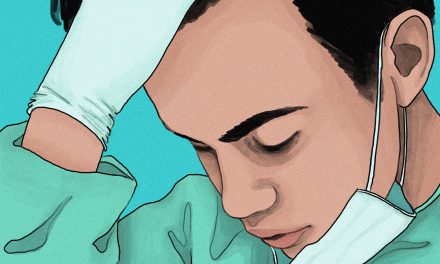 MENTAL HEALTH OF DOCTORS DURING CORONA 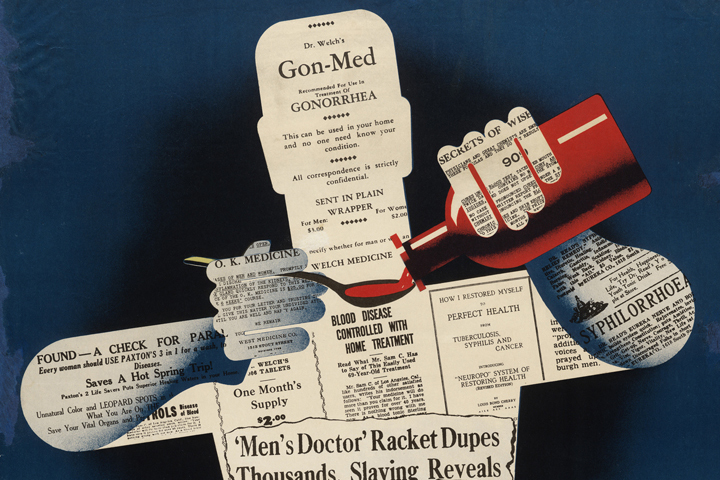 Drug Pusher or Healer – What are you?